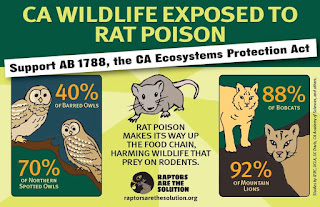 We need your help getting an important bill, AB 1788, the California Ecosystems Protection Act, over the next hurdle – the Water, Parks, and Wildlife Committee. Last week, the bill passed its first committee, but your voice is needed to make this bill law.

Sample Message: I am your constituent, and I care about protecting California’s wildlife. Please support AB 1788, the California Ecosystems Protection Act.

Rodenticides (rat poisons) designed to kill rodents are poisoning California’s native wildlife. Rodenticides are consumed by rats, who in turn are consumed by other wildlife, resulting in secondary poisoning and contamination of the food chain. Rodenticide poisoning is widespread. A recent analysis of 11 studies found that more than 85% of California mountain lions, bobcats, and Pacific fishers have been exposed to these dangerous poisons.

If you’re not sure who your assemblymember is, find your representatives here.

If enacted, California would become the first state to prohibit these cruel products. Help us make history and urge your assemblymember to support AB 1788.
Thank you to Raptors Are The Solution, for the heads up!