When I started our neighborhood Google group in August of 2010, my intent and purpose was then as it is now: to use my communication skills to help us understand what was happening around us, to encourage more civic participation and untimately, to improve the local planning process, or at least how these projects are communicated.

That said, it was the start of a personal journey I never expected to take, and I certainly never expected to end up running for public office of any type, least of all, President. However, at this time in our nation's story, we truly need bold change. People are tired of the lies and "business as usual."

Our band, Mari Mack & Livin' Like Kings is playing at Rancho Nicasio on that date, which just so happens to be exactly one year to the date of our next Presidential election.

Link to Rancho Nicasio: Make a reservation
Treat yourself to an evening out, and don't worry about ordering a

Downbeat is 4:00 pm and we expect to be finished by 7:00. Hang around for a chat afterwards, if you like. Let us work together to create a more peaceful, more organic world.

p.s. If and when you have a few minutes, please go to the link below, read the very short blog post, and watch the animated video. It struck a chord with me and I felt compelled to share it:

Posted by Homestead Volunteers at 5:59 AM No comments: Links to this post

"Reij, Garrity and other scientists working on the ground knew what Wade and other political leaders did not: that farmers in Niger and Burkina Faso, in particular, had discovered a cheap, effective way to regreen the Sahel. They did so by using simple water harvesting techniques and protecting trees that emerged naturally on their farms."

https://www.smithsonianmag.com/science-nature/great-green-wall-stop-desertification-not-so-much-180960171/#vLBrUh2Rv4OVfKcQ.99
Read more: Subcription to Smithsonian Magazine
Posted by M Tamburo (A Vehicle for Change) at 8:46 AM No comments: Links to this post

https://www.pbs.org/newshour/science/the-language-gives-it-away-how-an-algorithm-can-help-us-detect-fake-news
Posted by M Tamburo (A Vehicle for Change) at 1:56 PM No comments: Links to this post

Pardon the snark, but I take issue with the practice of shooting animals and calling it "conservation."

That said, please read, make up your own mind and comment. Unless a large number of citizens speak up and/or agree to relocate the elk, I half expect a new trophy hunting tourism boom in Point Reyes.

http://www.maritamburo.com
Posted by M Tamburo (A Vehicle for Change) at 1:22 PM No comments: Links to this post

A Graphic Representation Of Gerrymandering

Congressional gerrymandering as a font.
It would be interesting to see what Marin County's voting districts would spell.

https://theweek.com/speedreads/856423/someone-made-font-gerrymandered-congressional-districts
Posted by M Tamburo (A Vehicle for Change) at 10:06 AM No comments: Links to this post

https://www.rollcall.com/news/politics/maryland-senators-want-senate-action-election-database-operator-bought-russian
Posted by M Tamburo (A Vehicle for Change) at 9:07 AM No comments: Links to this post

Thank You! Plan to Drop Rat Poison on Farallon Islands Has Been Withdrawn - For Now

Thank you to everyone who wrote a letter, made a call and showed up. If this scenario sounded and felt familiar, that's because we went through this several years ago. Sincerest thanks go to Maggie Sergio, a former Marin resident who alerted us about this then and now.  I had already written a letter, and wanted to go to the Coastal Commission meeting, but we had previous plans - a secret surprise early birthday gift for my husband.

Plans could not be changed, and when I found out that Wildcare was sending some reps, well, I felt free to be with my family.

Anyway, I digress. We, the people will likely have the opportunity to do this again and again, or at least until our government is completely overrun by fascists, or, on the other end of the spectrum, is representative of most people with common sense, who understand that dumping  1.5 metric tons of anti-coagulant rodenticide onto a wildlife sanctuary is a bad idea.

That is, once we have had the chance to learn exactly what an anti-coagulant rodenticide does, and that there are safer, more effective alternatives.

Which begs the questions, "Why is this poison still allowed to used, to be sold? How is it that anyone with any sense of decency is still making and selling this? Why are you not adapting your products to make a better, safer world, instead of clinging to your old, outdated and dangerous ideas and methods?"

Thank you all for shining your light.

p.s.  Did I mention I'm running for President? I entered the race in April, and am currently in search of a campaign finance manager and a few passionate volunteers. Interested parties may leave a message at 415-789-MARI
If you have more money than time, please consider making a donation.
Every dollar makes a difference.
https://secure.actblue.com/donate/mt2020
#FeeltheBeat #RocktheVote

Posted by M Tamburo (A Vehicle for Change) at 9:57 AM No comments: Links to this post

(San Francisco) - The California Coastal Commission posted notice on June 21, 2019 of their upcoming public hearing on the Trump Administration’s proposed helicopter dispersal of 1.5 metric tons of poison bait pellets in the Greater Farallones National Marine Sanctuary, located 27 miles off the coast of San Francisco. The proposed poison drop is targeted for this fall.

This controversial poisoning plan by the U.S. Fish and Wildlife Service will be considered at a hearing of the Coastal Commission to be held on July 10 at the Embassy Suites Hotel in San Luis Obispo, and written public comments are now being taken by the Commission at EORFC@coastal.ca.gov

Abandoned by the Obama Administration in 2013 as being too risky to the Sanctuary and a threat to adjacent fragile coastal ecosystems, while also posing unnecessary danger to non-target species, the poison drop proposal here has recently been revived by federal officials, who are now pushing the Coastal Commission to find their scheme to be “consistent” with California’s Coastal Plan.

“The millions of citizens working to protect this treasured National Marine Sanctuary are counting on our Coastal Commissioners to ensure that the Wildlife Service instead comes up with a more precautionary approach than random airborne dispersal of dangerous poisons that needlessly kill and sicken harmless wildlife while becoming more concentrated throughout the predator food chain.” said Richard Charter of Bodega Bay, Senior Fellow with The Ocean Foundation and an appointed member of NOAA’s regional advisory council that helps to guide policies for the marine sanctuary.

The Wildlife Service asserts that burrowing owls from Marin pose a threat to Ashy Storm Petrels, a seabird that frequents the islands, but the same agency has also declined petitions to list the Ashy Storm Petrel as at risk under the Endangered Species Act, noting that their population is on the increase. The Wildlife Service is now claiming that not one single poison pellet will reach the water and that killing every single one of the islands’ house mice – accidentally introduced during the Gold Rush - using a slow-acting poison, represents the only way to discourage the small number of burrowing owls (6-8) from being attracted from Marin’s coastal headlands to feed on the mice.

The poisons being proposed are the subject of increased scientific scrutiny because of non-target wildlife disasters during similar air drops on island locations elsewhere. The State of California has outlawed retail sale of the same toxic compounds due to the unintended damage they inflict on mountain lions, bobcats, an iconic mammal called the pacific fisher, and in terrestrial urban interface locations, dangers to pets and children. Legislation limiting their use is now moving through the California State Legislature. Some within the Wildlife Service admit that large numbers of gulls ingesting the poison pellets  during a helicopter drop this fall, could return to die in mainland locations they frequent, such as at Fishermen’s Wharf. Any accidental wind- or wave-borne discharges of the poison into the ocean pose a contamination hazard to fish, crabs, and abalone.

Public comments on this marine sanctuary poisoning proposal should be promptly directed to EORFC@coastal.ca.gov and identified with the relevant agenda item, number W14a.
Posted by M Tamburo (A Vehicle for Change) at 8:53 AM No comments: Links to this post

Call to Action: No Poison for Farallones!

CALL TO ACTION:
There is a plan to dump 1.5 metric tons of rat poison onto the Farallones Wildlife Sanctuary.

Citizen engagement is necessary to prevent this from happening. Please call and/or show up to express your opposition to this plan.

If you are currently participating in the #FridaysforFuture climate strike, please join me on June 28th. More details to follow.
Volunteers needed. Please participate.
Thank you,
Mari

Please see the below statement from Maggie Sergio: 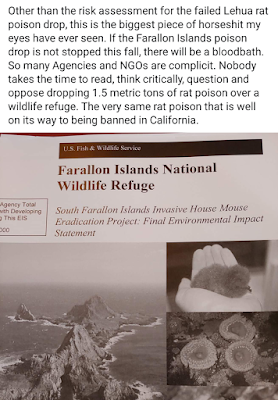 
Posted by M Tamburo (A Vehicle for Change) at 6:46 AM No comments: Links to this post